Only of the Heart from TerryLynn Melody

About four years ago, on a quiet afternoon, TerryLynn first logged into Second Life® to play video games—or so she thought. At a welcome center, she met some gamer friends, and about three months later, they decided to go try karaoke. Not using tracks, she played some of her originals on mike. Zo Canning—a fellow musician from Miami—tipped her and told her about SL music. Good thing he hooked her up with a stream!

She’s been performing my originals for almost eighteen years in real life. But in SL, she has gained new fans—if they resonate with one another—a new connection. It feeds them both.

The virtual music community is broad. Its grown so much! Its difficult anymore to know everyone. There was a time she felt she knew ALL of the musicians in SL. With so many now, its hard to keep track. It’s certainly not the small town it used to be—not just in SL, the web-based musicians, and all platforms. It keeps growing.

More and more musicians are venturing into live web performance, G+ Stage it, virtual worlds sound cloud. TerryLynn doesn’t think genre and venues distinguish. She sees a lot of mixed lineups of all different genres. Sometimes she will be paired up with a rock act, sometimes with country, sometimes it’s all folkies. Its always been that way. She thinks it’s a matter of how people hear the music, ultimately.

Residents in SL need to learn how to communicate properly. TerryLynn wishes there were a handbook that people could read pre-SL. She confesses that she could have used one. It’s really easy to misinterpret communication with no body language or inflection. SL teaches residents how to be better communicators over time. Besides becoming more direct, it is important to be detailed so as not to be misunderstood. Text leaves a lot to the imagination. It’s like instructions on a bicycle at Christmas. TerryLynn believes a lot can go wrong, such as how  many look at the music venue. Many in the audience don’t understand who the owners are and what’s really going on. A handbook, she suggests, would be great, but she is not so sure people would read it. It’s really a personal growth problem.

Venue owners are music fans who want to hear who they love. They are generally supporting the hour, by financially encouraging the artists they love, and with hope to recoup some cost through their friends. TerryLynn is concerned that both the audience members and musicians understand that the venue owners shell out a lot of money to support so many artists because they LOVE indie music and they want to be a part of helping it happen for artists like herself. If people understood this, they would be more generous with the artists. TerryLynn wonders if a single venue in SL ever even recoups 1/2 of what they shell out. She does her  best to educate fans. Some listen, but some still don’t get it. Music is perceived as free, which is why musicians are called  starving artists. 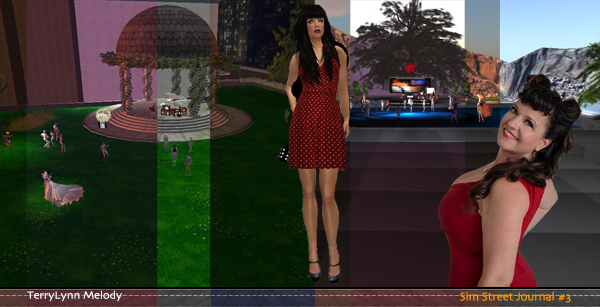 If the fans don’t tip artists, they don’t make money. If fans don’t tip the venue, artists don’t get gigs. SL is no different than real life in that aspect. And if an artist plays and plays and plays, and no one appreciates it, eventually that musician will hang up the ax and find something that brings back the love given. One-way relationships are too painful over time, no matter what level of passion, she explains. Burnout makes musicians come and go. Even the best disappear for a while—everyone has slumps. A performer can pull up her boot straps, suck it up, and keep chugging’. But she has to eat, and there are only so many hours in a day. TerryLynn will always play because she loves to. But with bills to pay, she must look for people who appreciate what she do enough to help support her.

So she explains that she never puts all of her eggs in one basket. She has a day job in a career she loves, thankfully. But she wants music to be more full time. Perhaps conditions will change for TerryLynn once she produces her first CD for the real life market. She knows that SL can be a good marketing tool for CD sales—though it is just one vehicle out of hundreds! TerryLynn describes that it’s a LOT of work as an indie to build a career. It takes a team, dedicated loving friends and fans, willing to help or it goes nowhere.

“Artists are supported by fans, not by sales.“

Having a great manager is essential. Sparkie Cyberstar, TerryLynn’s manager, was a music fan first and had a venue called the Breeze. It wasn’t enough. She wanted to help more. So TerryLynn is so happy about being Sparkie’s first artist to represent. They grew a lot together over these three years, and still are. TerryLynn thinks of Sparkie as a sister. Their collaboration is based first and foremost on communication, then on understanding, forgiveness, patience.

A manager has a lot to navigate. TerryLynn confesses that she would not  want to be that middle man—it’s a tough job. She did it in real life for a long time as an assistant to an agent in LA, though it’s a bit different than management. Managing in-world can be more on the booking end, which is different in real life where clubs have beer to sell and cabs to call for people leaving. If owners had to do that in SL, it would be a different story. Sparkie understands the in-world needs because she was a venue owner. She knows what and how to help them.

TerryLynn describes that “SL is pure, in some ways. It’s fan support at a personal level, and they can have cheap beer at home. I’ll admit there have been real life gig offers where, when I consider the travel, the time, load in, load out, and what they want to pay, and the fact that the gig is four hours long, it is not worth it. When you add up the time spent, and that most of the people there are there to drink or eat and they just want background music—they aren’t listening—not all places anyway—it can be disheartening. SL and web based performances start to look more and more appealing to an artist. When you average it out, sometimes Sl is better than real life, if you have venue owners who really love you.”

TerryLynn does not perform as much as she used to, having done at least ten shows a week in the past. Now she mostly just does one show a day. Because the venue owners are real music lovers, many want to support everyone, and there are a lot of musicians to choose from. TerryLynn has chosen not to perform any more than she currently does. And her crowds are better for it. She thrives on the energy of a packed house.

Who doesn’t? So playing a little less for her has meant bigger audiences than playing three or four shows a day. As much as people love an artist, who wants to listen to someone all day long, seven days a week?

Music and poetry have always been about discovering who she is for TerryLynn, and who the listener is, how the two fit together, and how to make it a better place for both. “If I express my feelings openly and honestly, then I give you the right, and the courage, to do the same. Then we really communicate.”

TerryLynn writes about what she knows—her fear, her confusion, her sadness, her hope, her life, what she sees. “I don’t overtly try to inspire, but you know, I find when I am open, and people respond—I feel loved. That honesty comes out in my writing and my performing.”

She has learned some things about herself through her friends/fans. “I’m not so sure artist always get that close to people in real life situations, or maybe it’s just me. Some people are a bit more guarded. But I’ve learned that I’m worth it. This is my life; I deserve to invest in myself; I deserve to be proud of my accomplishments; I deserve to be kind to myself; I’m a good person. I love people and I give all that I’ve got. I can’t ask more of myself than that.”

TerryLynn has a lot of advice to give. She explains that a musician starting out needs first to be kind. “Be true to yourself, but always remember: you do not know what the other person in SL is suffering or struggling with. You don’t really know who they are. Don’t give away more than you feel comfortable losing. Don’t expect anything in return. Most of all just be happy, share your gift, be grateful for what is returned to you, with much love and MORE MUSIC!”

Contributions are encouraged if covering topics relevant to the real world readers.
Comments and opinions are also encouraged.

Sim Street Journal explores the relevance of virtual to real commerce and culture.

2 thoughts on “Only of the Heart from TerryLynn Melody”